After ~20 hours of (high speed) trains, planes, and automobiles, I made it to Shanghai. By the time I got to Eric’s place, I was so tired, I was stuck on stupid. We had a couple beers and chatted a bit before I went into a post-travel coma for a whopping five hours. Stupid jet lag.

Shanghai is an amazing, chic, cosmopolitan city. While Eric and I couldn’t stop giggling about the corniness of the quote we heard, there’s truth to it: “Shanghai: Where the East meets the West, and where yesterday meets tomorrow.” There’s quite the amalgamation (sorry, it’s my favorite word in the English language) of culture in Shanghai, which really adds to its wonder.

If you think New Year’s is a big party, it’s not. New Year’s Eve in China is like Christmas Eve in Western countries. A lot of people flee the city to be with their larger families in the countryside, making Shanghai a ghost town. It also means 75% of the restaurants and shops are closed, so getting around the city is easy, yet eerily empty.

Ride a bike at your own risk

As Peter, my tour guide said, “Shanghai is not so bike friendly yet.” Uhmmmm … yeah, that’s putting it mildly. All I’ll say is I’m glad I wore my helmet and that it was no coincidence I had a cramp in my grip for two hours after the tour was done. The number of times I was almost taken out by another biker, scooter driver, bus, or even pedestrian was really too many to count. I’ll chalk that one up to a bucket list item I never knew was on there.

As in, I stick out like one. Between my height, blonde hair, and blue eyes, I don’t exactly blend in. People make no qualms about staring, but the curiosity is endearing. It’s not just me; there was a really dark-skinned Black man who people just walked up to and took selfies with. I did catch a couple people taking photos of me throughout the day, so I guess it could be worse.

Americans are a fetish

The Chinese are definitely excited to practice their English with us. One mom literally dragged her daughter up to us and “encouraged” her to say Happy New Year. We laughed, smiled, and said Happy New Year as her dad filmed the whole ordeal. The little girl shyly returned the salutation. When we crossed paths again five minutes later, she took a mulligan and this time ran up to us yelling “Happy New Year!”

After telling me how awful Donald Trump is, Peter my bike tour guide, gushed about how much he loves American culture. He later confessed that he loves how American English sounds. “It sounds so beautiful, much more than when people from other countries speak it.” The curiosity is really interesting and something I’m not used to.

On my flight to Shanghai I sat next to a man who grew up there. When I asked him what his favorite thing to do in Shanghai was, he said “Eat!” I also heard from people that “Chinese food is different in China.” Those people were right – it’s better! We didn’t eat breakfast and had a very late lunch. So when we stumbled on the well-known dim sum place in the posh Xintiandi (shin-tee-ahn-dee) area, we … ate. Dim Tao Fung’s dumplings and buns were to die for. I was in food heaven. However, I was quickly brought to food hell when we tried something called “hairy crab.” A gooey, awful mess. If you’re thinking “Crab shouldn’t be …” You’re right. It shouldn’t.

No one could explain why the area is called “The Bund,” but all I can say is that between the Oriental Pearl, Shanghai, and Aurora towers, it’s all an architectural and technological marvel. By day it was impressive enough, but it becomes truly spectacular at night. It gradually started lighting up at sunset before it fully launched in technicolor when the sun was officially out of sight at 6:00 p.m. I felt like a kid watching fireworks.

The Shanghai National Museum, Shanghai Opera House, and pretty much everything in the French Concession district are totally gorgeous, too. I’ll get to those another day.

This city is incredible

With the Lunar New Year kicking off today, it’ll be another fun day sinking into the cracks of the city. We’ll be focusing our time in Old Town and the French Concession. 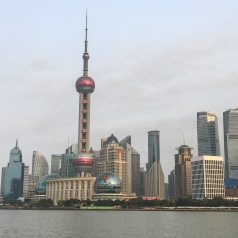 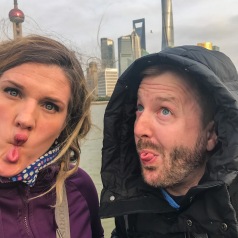