If jet lagging didn’t hold us down a few days ago, the 106-degree heat, hot sun, and oasis-driven humidity of Abu Dhabi (compared to the dry desert of Dubai) thoroughly kicked our asses yesterday. Even Ammar (pronounced uh-mar), our Jordanian driver, was profusely sweating through it all, which for some reason made me feel a little better about feeling like a damp noodle all day. He provided a remarkable history and culture lesson on the drive to Abu Dhabi, which I’ll fill you in on later.

The capital city of the UAE definitely didn’t disappoint. So much wonder and even more wealth.

First stop: Formula One and Ferraris

Technically, we first stopped at a place to learn about dates, which are widely consumed in the UAE, often with coffee. I bought a package of nut-filled dates that are covered in dark chocolate that were surprisingly delicious.

Formula One racing is a pretty big deal in the UAE, so we headed to the Yas Marina circuit track. There’s an option to get a lesson with a professional driver and then take four laps around in either a small Formula One race car, the faster Mercedes, the even faster Jaguar, or the fastest Astin Martin. At $160 for the Astin Martin, I seriously considered it until I learned that there’s no AC and you finish drenched in sweat. I was sweaty enough already and knew we had a long day ahead of us. I passed.

Just a quarter mile away is the architectural marvel that is Ferrari World. True to its name, it’s everything Ferrari, from branded Formula One cars, to its latest model, to some of the vintage race cars, to so much more. One of the biggest attractions is the world’s fastest rollercoaster. It’s huge and super fast, the fastest in the world, clocking in at a whopping 140 kmph (85 mph)! We didn’t have time to try it out. Plus, entrance tickets were around $100. No thanks.

Next up: Emirates Palace Hotel

What was once the palace of Sheikh Zayed (the first UAE president) is now a 7-star hotel for people to enjoy. His son, who is now Sheikh, has since moved to an even bigger and more luxurious palace about a mile away where he lives with his first wife. His second wife lives in the Emirates Palace, because there’s this whole “equal thing” with the wives, which I’ll get to later. The family are lovers of gold, which is apparent in the decor. Gold. Is. EVERYWHERE. And it’s not gold paint … it’s actual gold. You can even get gold from the ATMs! Upon entering the palace, you see a giant Rolex clock on the wall. Yep, made of gold and is the world’s most expensive Rolex. The palace was massive, impressive even. It was hard to believe that its original purpose was to be a home.

Heritage Village is where you come to see how Emirati used to live. There were three main house types recreated at the site.

It didn’t seem so significant until we were reminded that people were living this way until as recent as the 1970s. Compared to the ultra lavish lifestyle they now live, it’s very interesting.

Apparently, there’s an old and new one. The new one took 10 years to build and was opened to the public in 2007. It’s the fourth-largest mosque in the world, but at 1.5 billion dirham, was one of the most expensive to build. It boasts the world’s most expensive chandelier and the world’s largest rug, which cost $20 million. It’s silk, and it’s BIG. The inside of the mosque is massive, about the size of two football fields. Muslims pray on mats or rugs, so if the government is going to provide it, it’s going to be pretty big … and as they often do, they make sure it’s the best for its people.

There are very strict dress codes for women who enter the mosque. We did a lot of research before we left, thinking our baggy pants, shirts, and scarves would be sufficient. Alas, they weren’t and were given brown dress robes to put on. They’re comfy and made us feel like we were Jedi knights, which gave us a good giggle. So if you ever get a chance to visit this mosque, don’t bother worrying about what to wear. Just put on the robe they give you. Trust me when I say it’s a lot easier.

The mosque is absolutely beautiful, with lots of ornate tile work and decorative elements throughout. Two surprisingly wonderful things happened once we were inside the mosque:

If you ever make it to the UAE, be sure to make it to Abu Dhabi, and for sure go to this mosque. In hindsight, I would have spent the night for one main reason – to see the mosque at night, which is then apparently illuminated to a gorgeous blue. 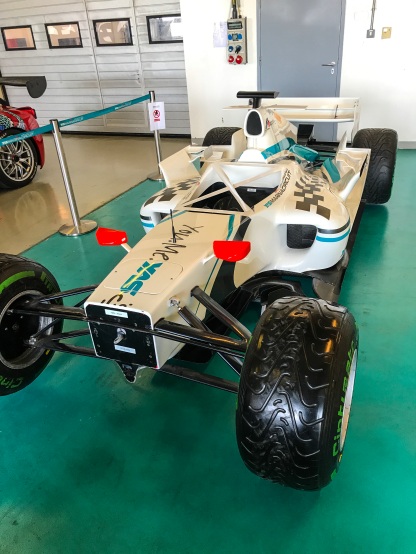 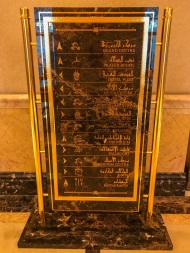 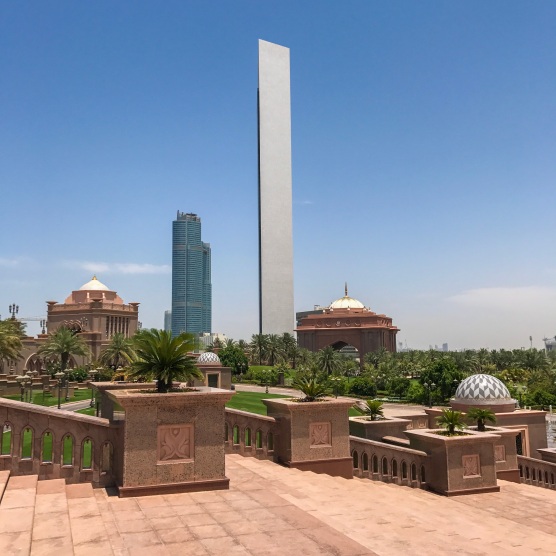 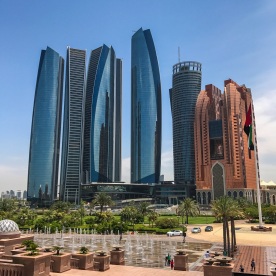 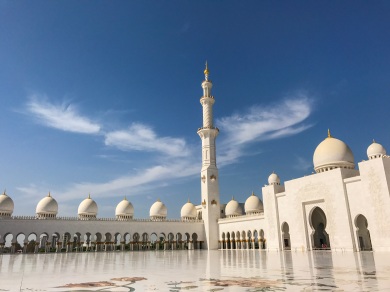 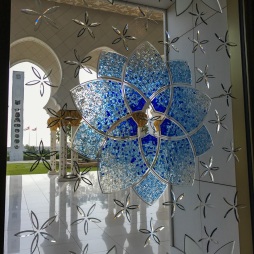 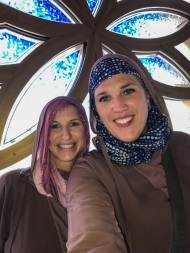 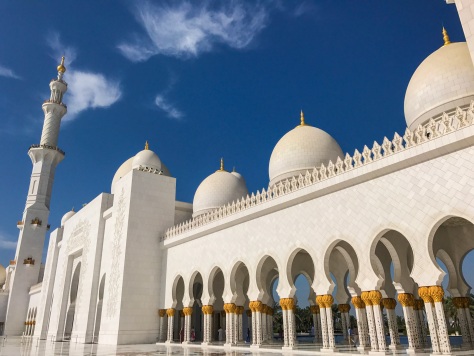