It’s not too often I’m going to spend time writing about a meal. (I’ll leave that to the food bloggers.) But the experience of high/afternoon tea in the Burj Khalifa is worth its own commentary. I mean, it included gilded desserts … meaning they actually had edible gold on them!

Here’s what you’ll experience (and some tips on how to go about it).

Make a reservation at At.Mosphere

The wonder of high tea goes down at At.Mosphere, which is the world’s highest restaurant. It’s located on the 122nd floor of the Burj Khalifa. It’s quite easy to make a reservation via their website. They’ll email and text your confirmations. The email will also provide instructions on how to access the restaurant. Making a reservation gives you expedited access to the Burj Khalifa at no extra cost.

Head to the Armani Hotel at the Burj Khalifa

Yeah, THAT Armani has a hotel, where rooms can get up to $40,000 a night. It lives up to what you’d expect. As we drove up, we passed several parked cars of models like Rolls Royce, Astin Martin, Bentley, Maybach, Mercedes. (Our Uber was a Lexus, so we didn’t feel too out of place!) Doormen opened our car doors and then another set of doormen were on the ready to welcome us to the hotel. Once entering, it smelled incredible and was impeccably decorated and designed. The soft lounge music playing in the background added to the unavoidably sexy vibe of the place.

We were no more than two steps in when an attractive woman greeted us. After explaining we had a reservation for afternoon tea, she walked us to the elevator we needed to take to get to the restaurant check-in.

Just two floors down was a check-in desk where two women who resembled models and were clad in black dresses (that I can only assume are Armani). After greeting us, one confirmed our reservation before the other escorted us to the express elevator.

A quick elevator ride up 123 floors

You access At.Mosphere via the 123rd floor. My ears popped several times during the smooth, 60-second ride up. Once there, we were directed to walk down a grand staircase to be greeted by the host table (that’s of course staffed by more ridiculously good-looking people clad in black Armani). The first few steps down were a little trippy, as thanks to the glass windows that surround the staircase, your eyes are quickly realizing how high up you are. The good thing – you’ll adjust quickly.

We were led to our window table which offered some insane views of Dubai. From 122 floors up, the surrounding 50-story buildings were completely dwarfed.

A bottle of sparkling wine comes with high tea, but you can upgrade to a variety of champagne offerings, which we of course did. Fareed greeted brought us our champagne and then left it in an ice bucket at our table. 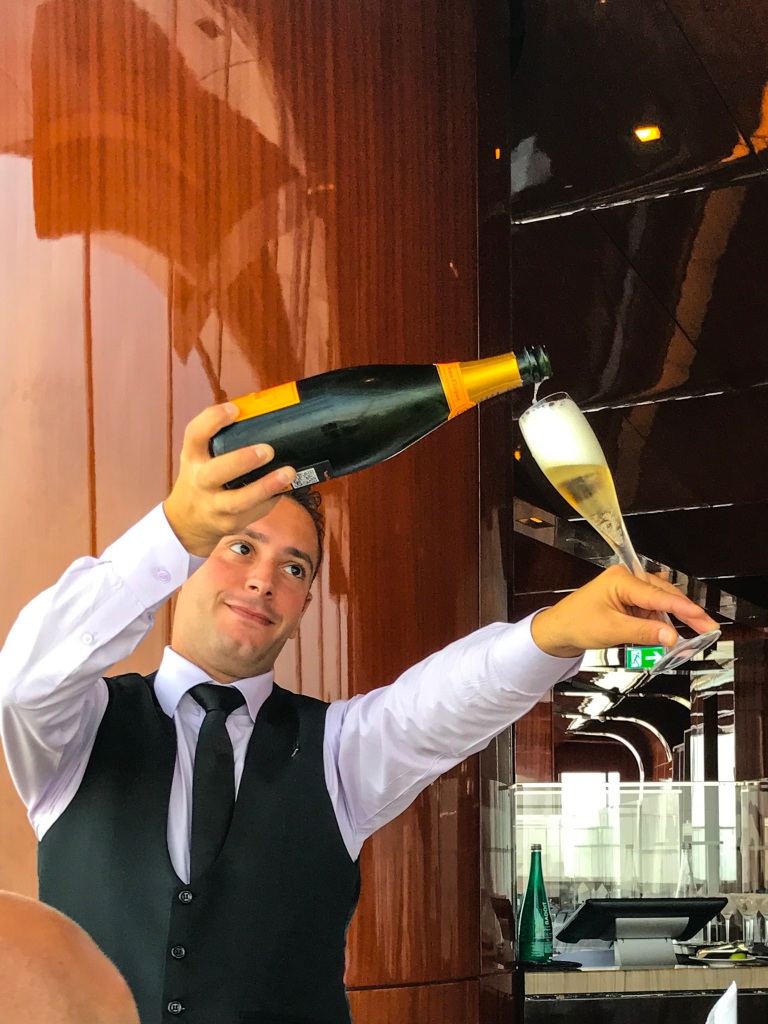 Afternoon tea starts with a martini glass filled with a mixture of blueberries, raspberries, and strawberries that are sandwiched between layers of coconut-infused whipped cream. On top of that is a mint leaf and flecks of edible gold. It was a nice, light start, especially with the bubbly.

Next up: Finger sandwiches

There were six options that included smoked salmon, cucumber, caprese, tuna salad, egg salad, and chicken salad. None of these were as ordinary as they sound. They’re very accommodating to dietary restrictions so Kristen had no issues with her shellfish/seafood allergy and I was a-okay as a pescatarian. Vegetarians can also do well.

This is more like a small plate offering, but given it’s served during high tea it’s considered a main course. I tried the seared scallop with a cauliflower purée, while Kristen enjoyed chicken with a potato purée. It was light and lovely.

Tea for two. And two for tea. And dessert!

The tea offerings were plentiful, some 50 or so available. I tried two different teas, each of which was prepared and the presented in a lovely way:

Then came a lovely towering tray of various desserts, many of which were also topped with edible gold flecks. From madelines, to macaroons, to scones, to other insane delicacies, the options were amazing. I think we were most enamored with the house-made butter and raspberry jam. Neither of us are “sweets” people, but we ate every single thing on the tray. There was no way we couldn’t. 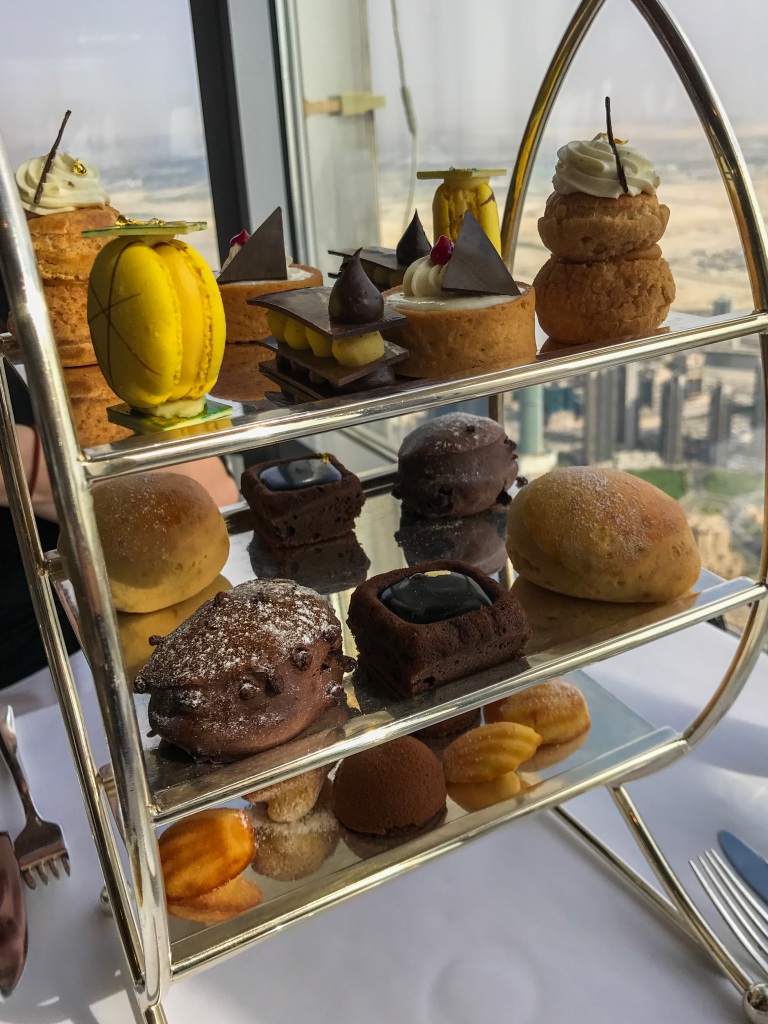 A pricy meal, but a worthy experience

Did I love it? Clearly. Would I do it again? Absolutely not. It starts at $135/person. With the window table and champagne upgrades, it came to about $175/person. It was worthy every.single.penny, so I’m definitely not complaining, but I wouldn’t do it again. This is one of those “once and done” things that I highly recommend you try. A special thanks to my friend Joy for the recommendation; it was a highlight of the trip!