When Swindle and I were doing some pre-trip planning and talking about what was on our punch list for this trip, she mentioned, “How many aqua-colored lakes can we see before it gets tiring?” We both agree, it turns out, not enough.

While the sights and hikes at Moraine Lake and Lake Louise were incredible, we were ready to be away from the crowds. So we headed to Icefield Parkway so we could see if both it and Peyto Lake (and Emerald Lake that’s off Trans Canada 1) were worth the hype. Yep, they definitely were!

The 145-mile Icefields Parkway takes you north of Banff to Jasper, which is both a city and national park. It gets its name because it’s where the glaciers came through thousands of years ago. The sights are stunning. Wide, U-shaped valleys flank massive mountains and create outstanding views. Every so often, you’ll drive by an absolutely gorgeous lake. The first stop on the Parkway was Peyto Lake.

Many mosquitoes couldn’t bring us down at Peyto Lake

Peyto Lake is located about 30 miles north of Trans Canada Highway 1. You can park at the first parking lot and hike up the hill, or do the “oops” we did and park in the lot up the hill where the buses park. (In our defense, we were following other cars and didn’t realize we parked in the wrong lot until we left.) From there, it was a quick three-minute walk to the lookout point. Between the turquoise blue lake and the incredible Wapta Icefield behind it, we had a “holy shit” moment that lasted for quite a while.

You can stay on the paths and be in and out in 30 minutes, which is what we did. There are other paths, but they’re basically an unmarked maze. With no cell reception and being pretty sore from the day of hiking before, we opted to save our hiking efforts for later in the day.

The only negative – the mosquitoes. It was serious whack-a-mole. The dogs were even going a little out of their mind, biting at the bugs and scratching themselves like crazy. So if you go, double-up on the bug repellent.

Waterfowl Lake was a unexpected delight

We only came across Waterfowl Lake accidentally. The views of the valley from Peyto Lake inspired us to keep driving along the Parkway to see what wonders we’d come across. Waterfowl Lake was about 15 miles past Peyto Lake, conveniently located on a stopover off the road. It’s pretty hard to miss.

Waterfowl Lake was such an unexpected highlight that we decided to sit on a rock next to the water and enjoy one of the sandwiches we packed for the day so we could take it all in. The pups waded and “patiently” watched while we ate. 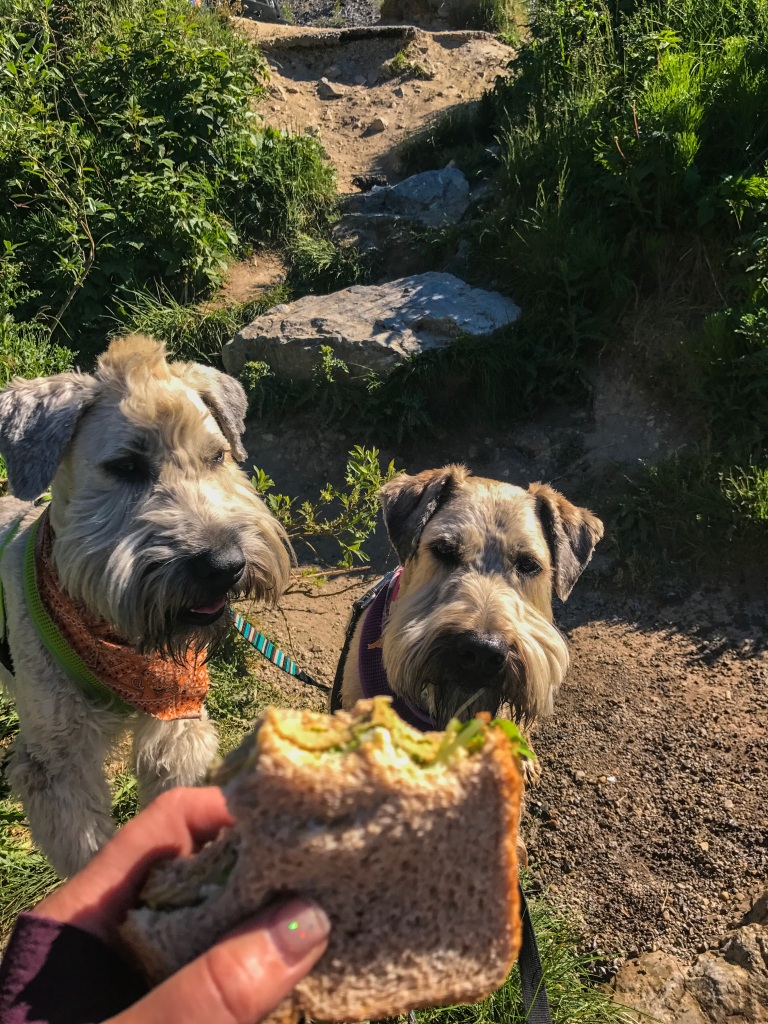 A relaxed hike around Emerald Lake

We knew that Emerald Lake was in Yoho (not to be confused with YOLO) National Park, but we didn’t realize that it meant we were crossing into British Columbia. That means we’ve made it to three provinces on this trip! Emerald Lake is about a 20-minute drive into British Columbia. Like so many of the other lakes in the area, it has majestic blue waters and tons of hiking and walking paths. We opted for the Emerald Lake Circuit, which was about four miles to loop around the entire lake and relatively flat. It was definitely less busy, but later in the afternoon and warm, so there was an unfortunate haze. Don’t get me wrong, it was still stunning, but a little hazy from the bright, hot sun. 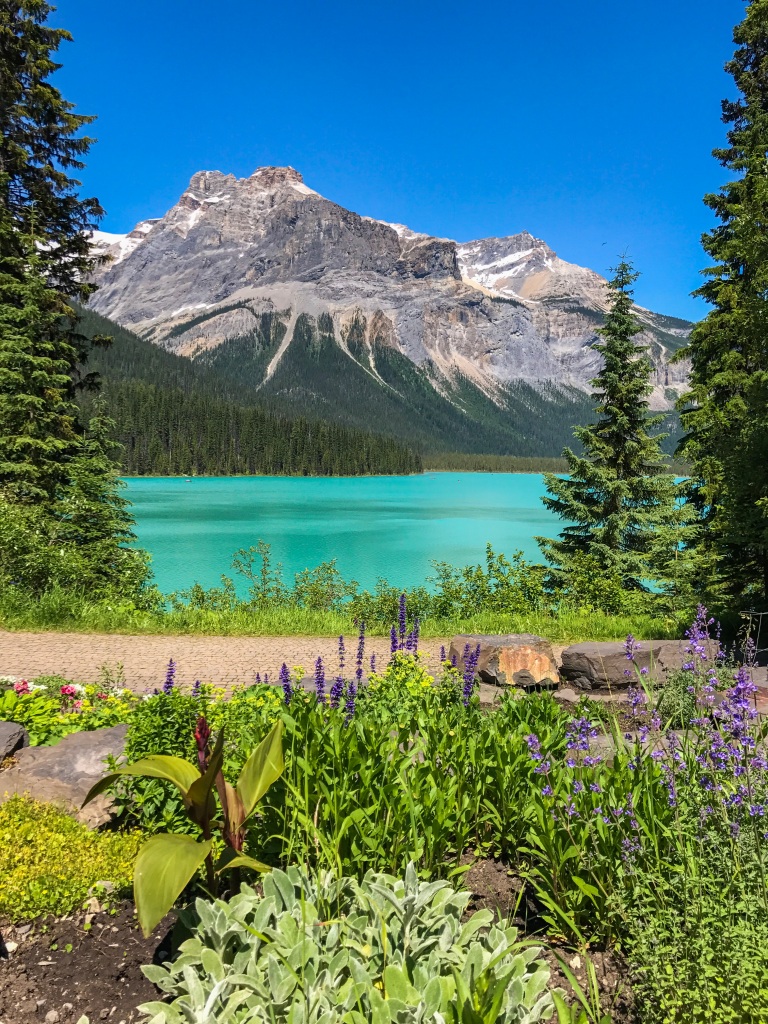 As we walked, we went by a snowpack, which was a little wild to see given it’s early July. The dogs were completely overjoyed – digging their paws and rubbing their faces in the snow.

At about the midway point, there was wetland type area where all the little glacial streams come together. You’re able to walk on it and get to the edge of the lake. That’s where we opted to wade in the water and have another sandwich. The water was cold, but not as cold as Louise, Moraine, or Agnes, but it was still just as clear, clean, and refreshing.

Frankie seriously could not get enough of the lake. She’d pull to wade in it any chance she got and would take a few drinks for good measure. It was literally becoming “water in, water out” for her. It was pretty funny. I think glacial water has become her new drug; she can’t get enough of it. 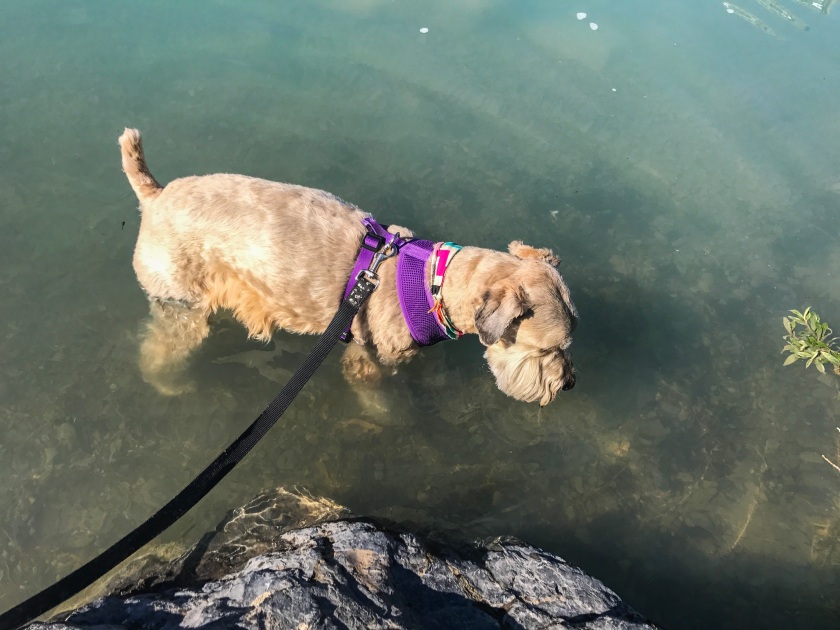 One thing to be mindful of … gas stations are far and few between. Basically, with all the hills and winding of the roads, my gas gauge played some weird tricks, and things got stressful for a bit. Out of desperation, we did a turnaround to go back to a gas station that was out of gas when we went by it earlier in the day. They had gas the second time around, so we added enough gas to get us back to Banff … to the tune of $3.80/gallon.

The brush with near-run-of-gas experience got us into researching about gas gauges. We learned how off they are … for all cars. Apparently, when the gas light comes on in my car, I have a whopping 60 miles before my car will actually run out of gas, not the 20 miles I assumed. Now, I’m tempted to test it … close to my house, of course.

The dogs definitely lagged behind as we made our way back to the car after Emerald Lake, and they’ve been pretty much passed out since we got back to camp. It has resulted in some ridiculously adorable pictures of them sleeping together, one of which is below. 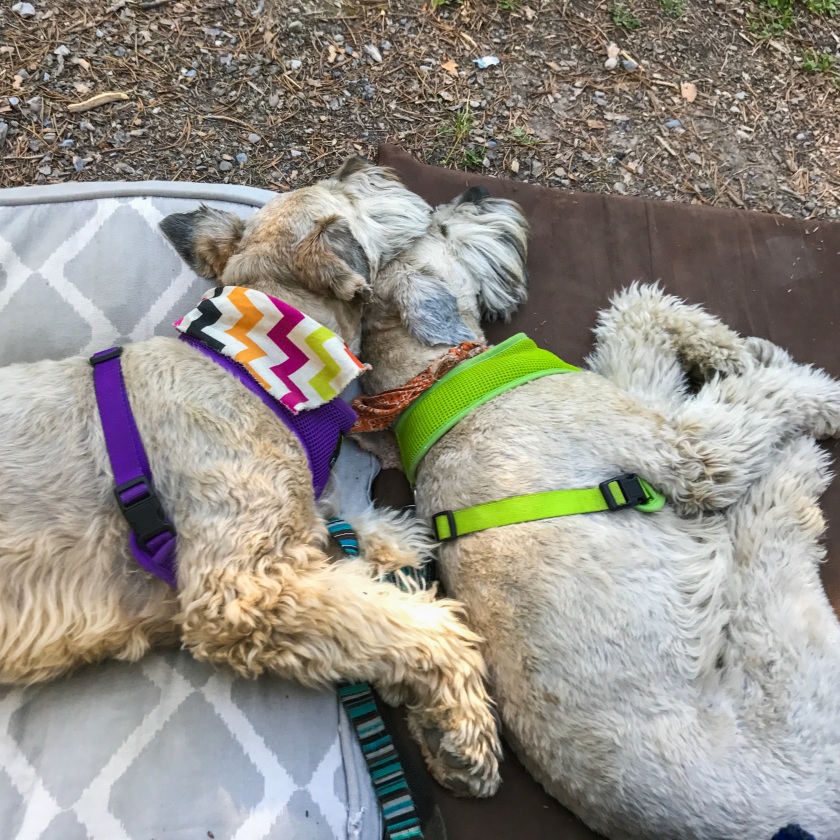 It’s a little bittersweet that this is our last night camping. It’s been so nice being outside these past few days. We’ve been surprised to see how many people only camp for two nights; the three nights we’re staying is by no means long, either. We started with Rye and Ginger cocktails and have since switched to hot chocolates … spiked with butterscotch schnapps. So we’re feeling good.

We have another early day tomorrow to hike Johnston Canyon and the Ink Pots. More to come. This has been quite the wonderful adventure! 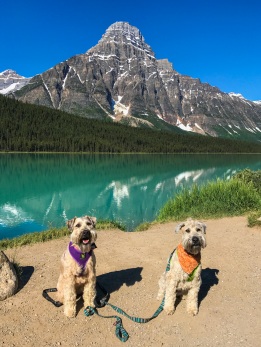 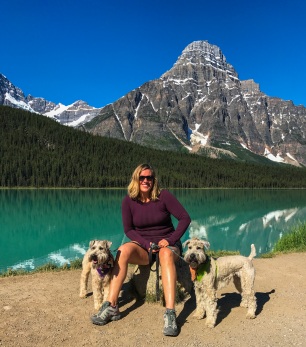 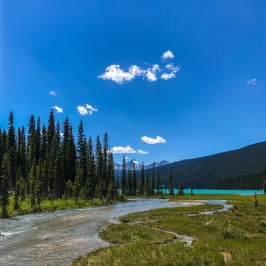